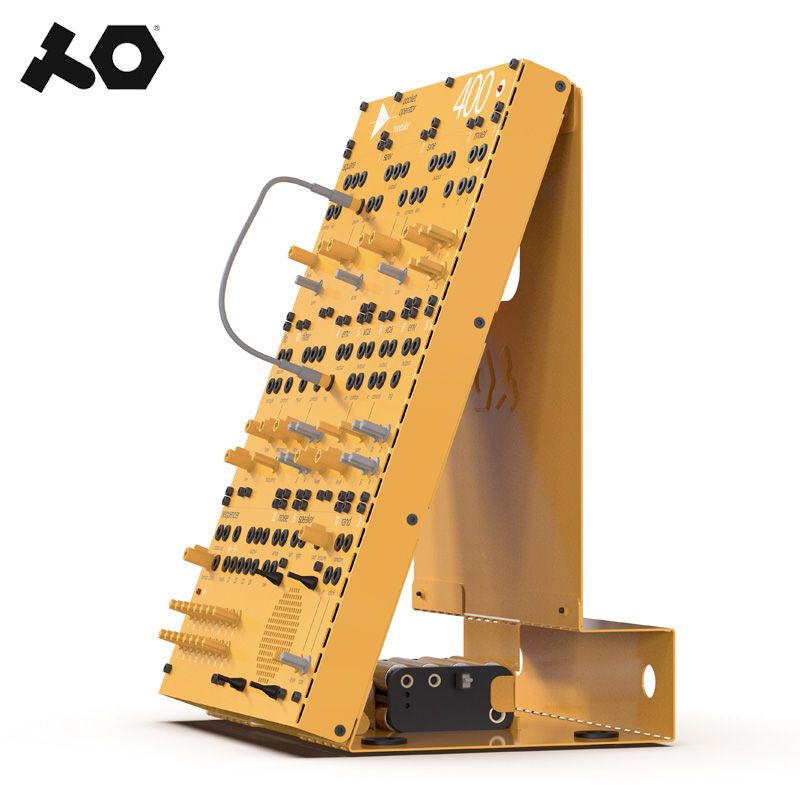 Teenage Engineering is illustrious, to say the least, and their PO Modular 400 is another classic in their canon. The 400 is a full modular synthesis environment complete with everything you need to build your own heaving, weaving, wobbling CV tapestries. The PO400 comes as an easy-to-assemble kit—without any specialized tools, you can assemble your own fully-featured modular synth within the course of an afternoon. If you can build Ikea furniture, you can build a synth!

The 400 system's oscillator section is comprised of three modules that each feature one waveform. The Square, Saw, and Sine wave modules all feature three outputs and inputs for Control and Key. Key acts as a typical 1V/Oct input, while Control can be scaled by the module's level knob, allowing you to control the depth of incoming modulation. Each oscillator module also features an additional input: the Square oscillator provides a PWM input, while the Saw and Sine oscillators each have dedicated FM inputs. Also worth noting—these oscillators do go down to quite low frequencies, so they may be used as modulation sources or sound sources...the choice is up to you!

The 400's filter module features three identical outputs, and two CV inputs for control of the cutoff frequency of the filter—as well as an audio input. The filter offers dedicated controls for Cutoff and Resonance.

The 400 offers a utility Mixer section for its waveforms that features three inputs and one output. The Mixer module has controls for each of these inputs as well as a master volume knob for the module's output. And while the most obvious use for this section is to combine oscillators prior to the filter, it can also act as a CV mixer, allowing for complex and nuanced modulation.

Speaking of modulation, the system also features a Random module: a sample and hold that takes incoming signals and generates a random output signal. The module has two outputs and two inputs for CV input or clock. The Random module also has a Rate function that sets the rate in which your input signal is sampled when not using an external clock source. The 400's LFO module is a utility-style LFO with two outputs for each of its waveforms: Triangle and Square. It also provides a rate knob to control the frequency of the module's CV output.

Additionally, the system includes two envelope modules labeled ENV. Both modules are traditional ADSR modules with knob control for each stage, and two outputs each. The envelopes both feature Trig inputs for initiating the envelope's cycle. The 400 also features a pair of utility VCA modules, each of which works equally well for audio or CV. The VCAs also provide attenuators for their CV inputs as well as dedicated level knobs for their outputs.

The Noise module is a utility noise generator that features two outputs for each noise type. The types of noise that the module can generate are White Noise and Saw. Saw is unique in that it uses a sawtooth wave for its basis, not dissimilar to Serge's classic S/H Source.

The 16-step Sequencer module acts as a central hub of control. It features three CV outputs that can be used simultaneously as well as a pair of outputs for its Clock. The sequencer offers inputs for a ton of its controls, including a Left/Right input that changes the sequencer's running direction, as well as inputs for clock and reset. Additionally, the D1–D4 inputs are used to digitally address individual steps of the sequencer: just patch in gates to do binary-style sequencer addressing. The sequencer goes for classic synthesis aesthetics as it uses a knob per step design that establishes the amount of CV your sending through your outputs. However, turning a knob all the way to the right will shorten the sequence, making the sequencer play only the steps before it.

The last module of the 400 series is its speaker. The speaker features two inputs labeled left and right, and a stereo output. The volume of either the speaker or output is controlled via a dedicated volume knob. It is important to note that the knob is reversed, however, so turning counterclockwise turns the volume up and clockwise will turn it down.

The Teenage Engineering PO Modular 400 is a densely packed ecosystem of synthesis options and contains an enormous amount of functionality into a form-fitting real estate. This makes the 400 perfect for those looking for full systems to learn on, as well as musicians who want to add a full bank of modules to their system but aren't looking for the hassle of setting up a new case and system. Whether making noise or fully-produced tracks, the PO400 can find a place in any setup.

NOTE: This is for a DIY project and will require assembly.

Due to the nature of DIY projects, no returns allowed on kits that have been attempted to be assembled or with missing components.