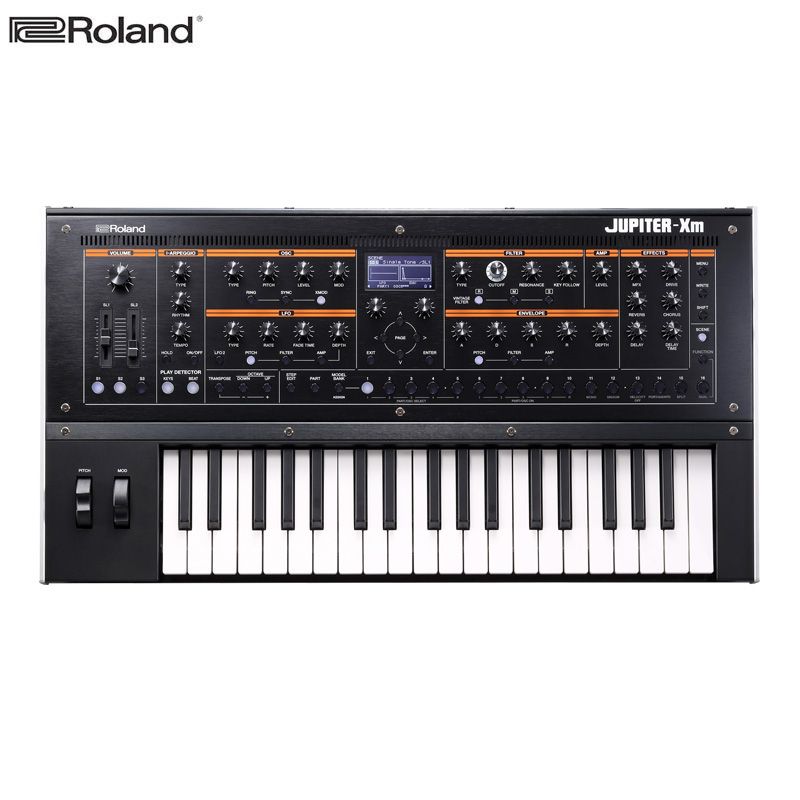 In 1978, when polysynths were the hot new thing, the Jupiter-4 put Roland on the map as a top synth maker. Since then, synthesizers bearing the Jupiter badge have proudly represented Roland's premier sound technologies and keyboard actions. Now Sweetwater is thrilled to present to you the Jupiter-Xm Synthesizer, which will redefine your concept of what a synthesizer can be. Incorporating classic Roland design and tour-tough build quality with the beastly new ZEN-Core synth engine, the Jupiter-Xm meticulously re-creates coveted instruments from Roland's vaunted legacy of genre-defining synths, while blazing new synthesis frontiers. Featuring multiple layers, tons of polyphony, and deep hands-on control, Jupiter-Xm gives you the power to effortlessly craft and deploy massive, evolving soundscapes with warmth, punch, and shimmer. Equipped with 37 solid, responsive mini keys and optional battery power, Jupiter-Xm is the self-contained, ultra-portable performance and electronic production synth you've been waiting for.

Jupiter-Xm is equipped with Roland's latest cutting-edge sound engine, which not only can reproduce sought-after analog classics such as the Jupiter-8, Juno-106, and SH-101; but also vintage digital synths like the XV-5080 and today's RD pianos. Also onboard: an arsenal of Roland drum machines (including the TR-808, 909, 707, 727, 606, CR-78, and more) that are the cornerstones of electronic and dance music. The Jupiter-Xm is like a studio packed with vintage gear — but with modern capabilities and a deep, powerful synthesis engine that opens the portals to new sonic worlds.

Whether you're backing a singer or scoring to picture, you're familiar with working under pressure. You're often in the position of having to produce something amazing — quickly. Say hello to your new best friend: Jupiter-Xm. It's equipped with Roland's next-gen I-Arpeggio, which uses artificial intelligence not only to accompany you — but to spark your creativity. I-Arpeggio takes in your notes, rhythms, and phrases, and outputs perfect drum parts, bass lines, chords, and arpeggiated figures. This intelligent arpeggiator works simultaneously on each of Jupiter-Xm’s five parts, and you can customize the generated patterns and export them to your DAW via USB. Note that these are not backing tracks: they are intelligently generated beats and phrases that flesh out your live performance and obliterate writer’s block — a welcome feature if you're looking to define your own unique voice as an artist!

In addition to its informative LCD display, Jupiter-Xm is equipped with an impressive array of knobs, faders, and buttons that invite the immediacy of hands-on control. These robust controls feel smooth and precise for confident real-time sweeps, subtle or bold. Of course, Jupiter-Xm has a dedicated studio-grade FX section, and switching between synth layers is easy, so you can immediately take control of any aspect of your sound. The control offered by the Jupiter-Xm is so intuitive, you have the sensation of reaching in and massaging your sound to shape it exactly the way you hear it.

With the ability to layer up to five parts — four for synths and one for drums — Jupiter-Xm is a beast. Its engine can power multiple authentic Roland classics such as the JX-8P and Jupiter-8 with ample polyphony to create thick layers and complex backing parts. Craft the ideal bass/lead split with an SH-101 and JUNO-106; layer a pristine RD piano with rich JX-8P strings; build a behemoth stack of Jupiter-8s; With the Jupiter-Xm, your creative vision is never compromised by technological limitations.

With JUPITER-Xm, you have the freedom to create, perform, and produce any time and anywhere. It operates for hours on eight AA batteries (an AC adapter is included); it's equipped with powerful speakers that can also play audio via Bluetooth; it even controls soft synths on your computer or iPad via Bluetooth MIDI. You can jam along to your favorite music, produce new tracks, layer internal synths with soft synths — and do it all without ever having to plug in a single cable!

All too often, portability means sacrificing playability or sonic flexibility. Roland designed JUPITER-Xm to strike the ideal balance with an all-new 37-note slim keybed that redefines just how expressive a compact keyboard can be. Whether it resides in your home or commercial studio or is part of your touring rig, Jupiter-Xm is built for the long haul with a robust metal chassis and premium components to stand up to the rigors of professional use. Equipped with high-grade balanced connections, a bevy of performance controllers, and multiple pedal inputs, Jupiter-Xm is the perfect partner for your musical exploits — wherever they may lead. It's also expandable so you can update it with new content as it becomes available. It can also directly share sounds and other content with its big sibling, the Jupiter-X.