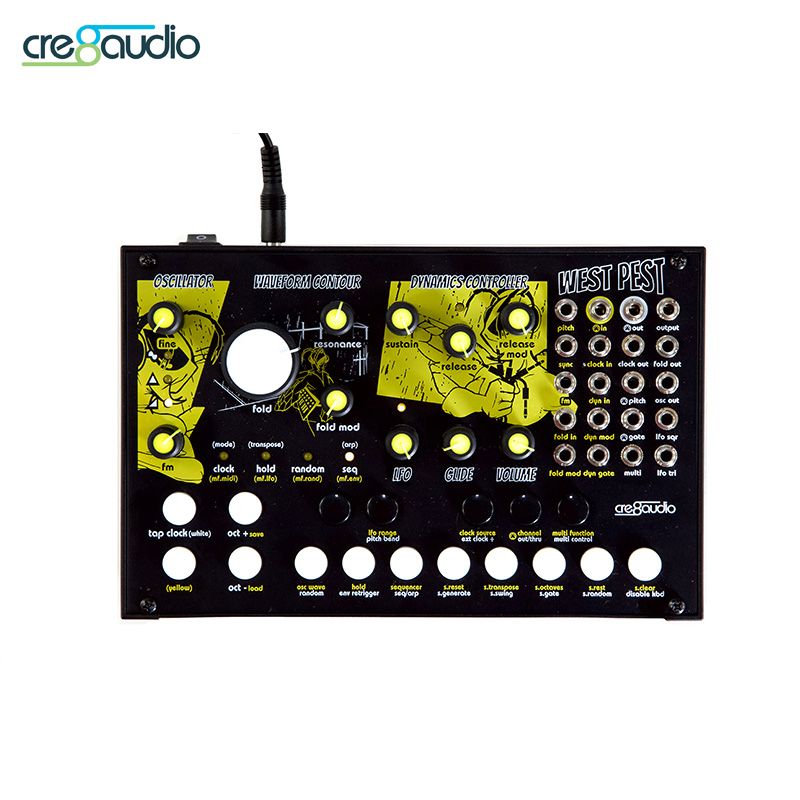 The too hip for school cousin of our very own East Beast desktop synthesizer, West Pest is a pesty cornucopia of simple complexity. What?

The West Coast folks couldn’t be like everyone else. They had to go all yoga mat, kale smoothie, and alfalfa sprout on the synth world. West Coast style is typically characterized by additive derived, rich and complex sounds. Often more traditional user interface elements are replaced by the abstract and experimental. Perfect for you sophisticated folks.

All that said, West Pest is actually not a deep dive into the abstract. It provides a wide array of sonic capabilities while maintaining a quick and easy workflow.

You’ll make fresh & inspiring sounds in a flash without having to think about kale smoothies, unless that’s your thing, in that case, yes tons of kale smoothies, pitchers full of them. Anyway, West Pest’s huge sonic capabilities emanate from its modest bento box-sized (sprout-free) exterior.

If eurorack is your thing, feel free to pop West Pest out of its enclosure and transform it right into a 40HP eurorack module, or keep it in its case and use it anywhere for your West Coast style pleasure..

Its beautiful buzzy circuitry is not a clone or based on any outside designs. It is made with 100% modern components. This keeps it very stable, and giving it a super rich, and unique sound.

No animals we harmed in the development of West Pest’s oscillator (except some of the pests that work at Pittsburgh Modular Synthesizers, but ehh, they had it coming).

Cre8audio not-so-very wacky colleagues at Pittsburgh Modular Synthesizers love to drone on and on about wave folding/shaping, you’d think they’d invented or something. Seriously, never ask their founder Richard Nicol about wave folding, that is unless you are looking for a fast track lulling to sleepytime. That said, what wave folding does to your sound is super interesting. So we’ll give you just the short important bits…

A wave folder shapes sounds differently than a filter. Instead of removing harmonics, the wave folder increases the harmonic content of the oscillator by folding the wave in on itself to create sonically rich waveforms.

West Pest’s wave folder takes what traditional wave folding circuits have done for years and ups the ante, allowing the user to fold previously unfoldable waveforms. We’re not gonna get into the how’s and why’s. Richard would feel the need to jump in with too many boring facts. We’d frankly rather go on a juice cleanse than listen to another lecture on wave folding/shaping, so just suffice it to say, it’s super cool and we’ll leave it at that.

In addition to being able to send all of West Pest’s waveforms through its wave folder/shaper, you can also input external sound sources. So go ahead, get weird with it. We do.

In continuity with the whole West Coast synth vibe, West Pest has a dynamics controller as well as an LFO to further sculpt its sound.

Semi-modular means that the West Pest will work without any patch cables. But what’s the fun in that? Who doesn’t want to build a magnificent web of patch cables flowing in and out of their synthesizer? Brewing up sounds the old fashion way like unwavering generations before you, one patch cable at a time is where the real magic happens.

West Pest provides access to basically 8 different modules (Oscillator, wave contour, dynamics controller, LFO, multi-mod tool, MIDI to CV converter, sequencer, and button keyboard) worth of functionality with a whopping 18 Eurorack compatible patch points to plug into itself and your other gear. Rewire West Pest’s signal flow, or share your favorite elements from West Pest with any other compatible synthesizers and vice versa.

MIDI MIDI MIDI, we’ve often got MIDI on our minds. So we seem to put it on a lot of our non-junk. Why? Because we can, that’s why. Our good friend says MIDI is for people who have no friends. We think he couldn’t be more wrong.

All of our imaginary friends love MIDI! There’s really no better way to get West Pest integrated into a daw environment or connect to a controller.

So yeah, it’s got MIDI in, and MIDI through. Connect to a DAW, controller, daisy chain, or not. West Pest has you covered, at least, MIDI-wise.

But wait, there’s more! West Pest includes quite a few additional performance features. Why not get extra pesky-like by getting serious like our friends at Pittsburgh Modular Synthesizers (they have to buy us lunch each time we include their full name on our website) and dive in with its built-in tap tempo clock, arpeggiator, and sequencer. There’s a lot of opportunities to inject in some randomness too. Tacos! Was that random? We think not, ‘cause that’s what we’re getting for typing Pittsburgh Modular Synthesizers just now again.