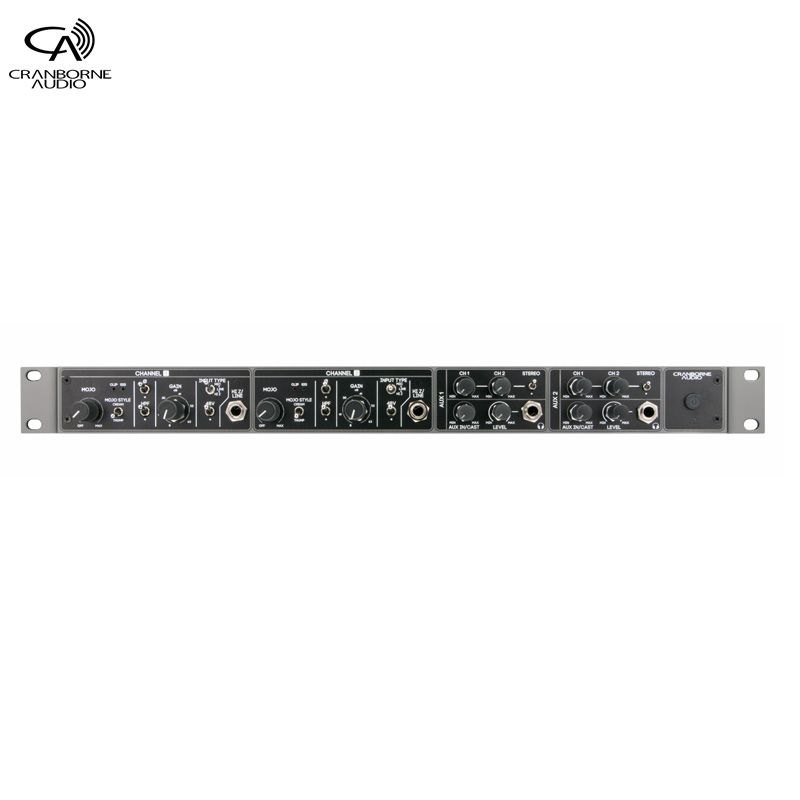 Based on the award-winning Camden 500 Preamp and Signal Processor for 500 series, Camden EC2 combines the sonic capabilities of one of the markets cleanest and most transparent preamps with the flexibility of a compact 1u 19” chassis that can integrate into any recording setup with or without 500 series connectivity.

Featuring two discrete instances of Cranborne Audio’s ‘Camden’ preamp topology with the same Mojo analogue saturation circuit that engineers and musicians the world over have fallen in love with, Camden EC2 achieves stunning low-noise and low-distortion performance as well as frequency and phase linearity at all gain settings. The sum result is -129.8dB EIN (150ohm, unweighted), THD+N as low as 0.0002%, frequency response of ±0.7dB from 5Hz to 200kHz at max gain and <2° phase shift @ 20Hz – 20kHz.

12-way rotary gain switches for each preamp as well as dedicated Mic, Line, and Instrument modes allows Camden EC2 to perform in stereo/dual-mono mic’ing setups, stem saturation processing thanks to Mojo, and instrument DI solutions thanks to dedicated ¼” link-outputs for each channel.

Combined with Cranborne Audio’s custom Mojo analogue saturation circuit, Camden EC2 can take on the persona of a vintage british-style transformer-based preamp using Thump, a gooey tube-based preamp using Cream, or an astoundingly clean and natural preamp when Mojo is bypassed. Switch each Camden preamp into their line mode and now the Mojo saturation circuits can apply vintage colouration onto your stems and even stereo mixes during the mix phase.

Camden EC2 also utilises Cranborne Audio’s unique C.A.S.T. system for distributing audio around studios or stages using affordable cabling whilst achieving the highest sonic results. By repurposing the internal copper wires of a Cat 5 cable to transport balanced analogue audio to and from other C.A.S.T. enabled products, Camden EC2 can be used to expand the connectivity of your Cranborne Audio equipped studio.

If your studio is already built around a Cranborne Audio 500R8 or 500ADAT, connect Camden EC2 to their C.A.S.T input connectors and you can then receive Camden EC2’s preamps directly at the interface's inputs ready for further processing and recording. That same Cat 5 C.A.S.T. connection also transmits a stereo monitor mix generated by the 500R8/500ADAT back down the same Cat 5 cable and directly into Camden EC2’s Aux 1 headphone mixer for monitoring.

A Second C.A.S.T port on Camden EC2 allows you to relocate its rear panel I/O into a remote location such as a vocal booth or a live room using Cranborne Audio’s passive N22 passive C.A.S.T. breakout box or active N22H headphone amp. These breakout boxes enable the engineer using Camden EC2 to make the most out the available studio space by running an N22 into a hallway, reverb chamber, or alongside the musician in the isolation booth for direct monitoring and mic connectivity.

So much more than two Camden 500’s in a metal box, Camden EC2 is another Cranborne Audio product manufactured in the UK under the team’s watchful eyes and features elite audio specifications and application-based features that defies its price tag and is accessible for professional, project, and home studio engineers.