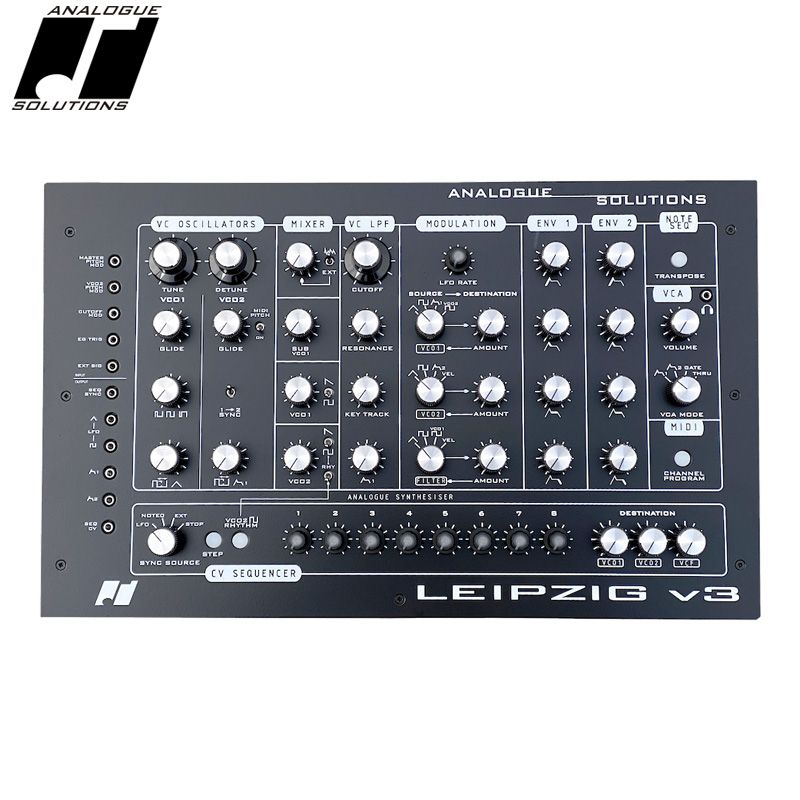 Leipzig-v3 is a 100% analogue synth using circuits that date back to the 1970s and 1980s – these give Leipzig a really old sound that is rich and full of character.

Leipzig has a huge sound, especially when used for bass (something it excels at!), a fact often commented to us by our customers with great excitement! The mixer / filter can be really overdriven if required giving the synth a really hard sound. This can be toned down of course and nice soft synth sounds are possible too - and everything in between.

Though a master at big bass sounds, Leipzig is exceptionally good at making electronic percussion. Not just the sounds, but also percussive loops by using the on board step sequencer. Patterns can quickly be produced, then either easily sync’ed to your DAW, or sampled in.
As well as bass and percussion, Leipzig will produce leads, effects, modular style and other sounds equally well.

Leipzig is extremely powerful. Don’t be worried by the ‘complex’ looking front panel. The synth has been designed to be easy to use, ideal for beginners, but still have the depth and versatility to enable many years of superb sounds.

There are many modulation choices on the rotary select switches. All signal choices have been carefully chosen.
Leipzig was designed by a musician of electronic music, and a popular choice by known music professionals. We like to think we know what makes a good synth and that is reflected in the design of Leipzig.

The on board analogue sequencer is not just for making simple melodies or percussive loops. Think of it also as a modulation source. Each step can be used to drastically change the sounds. This makes it also serve as a simple way of making ‘presets’. Just step to get the next sound. The sequencer can control the pitch of either VCO, and also the filter cut-off.

Leipzig also has a 16 note digital sequencer too, for playing back melodies, that can then be manually transposed using your keyboard or DAW.

Sync’ing the sequencer to a MIDI sequencer or DAW couldn’t be easier. Sync is easy by sending it MIDI Note 000. That way you can clock the sequencer at any tempo, divide the tempo down (relative to your DAW’s tempo), stop it, start it, mute, etc, all from your DAW – something that you cannot do with MIDI Sync.
So Leipzig is ideal for both beginners, and more advanced synthesists and musicians. Use anywhere you want big analogue sounds that have a true vintage sounds. Ideal also if you have the budget for just one analogue synth since this synth covers so many bases (and basses!).

The new version has been entirely redesigned to improve reliability, quality and other manufacturing considerations.

The format is now the more popular desktop type. This version is not rack mountable.

Sound wise it is the same - it retains that wonderful angry pure analogue sounds the previous version had. We kept the sound the same - it’s what people love - we just added some useful new features….